I read a memoir last spring about an American family who decided spontaneously to move to Italy for a year. They gave up their affluent jobs in California living off of what they made selling their home in the States. They travelled extensively with their two children - making their way across the European continent. I was especially captivated by her entry on the train trip they made to Innsbruck, Austria at Christmastime; it sounded so magical and stayed with me.

Because I'd visited Seattle in the autumn, we knew that we would not be able to make the long trip again in December. I've never been away from my mom at Christmas which was strange, but a thought popped into my mind, why not go on our own little adventure and celebrate Christmas somewhere we had never been before, just the two of us? My mind flicked back to that book I'd read. I had received another book for my birthday published by Lonely Planet, The Cities Book, which counts down their top selections of the most interesting and beautiful locations to visit in the world. Low and behold, the city of Innsbruck made the list. We hatched a plan. Christmas in Innsbruck, followed by a day or two in Salzburg and finish off in Munich for the New Year!

We made our journey by car and stopped the first night at one of the most famous Christmas markets in Nuremberg, Germany. It's the the largest I've ever seen with hundreds of stalls woven around the main square beneath the picturesque cathedral. The city was ablaze by thousands of twinkling lights. We sipped gluhwein, perused the many shops and listened to Christmas carols being played on the traditional French horn (We didn't sleep well as it was the beginning of the trip and a very hard mattress!)

The next morning it was off to Innsbruck, a 3 hour drive from Germany. To our disappointment there was no snow on the ground, but a beautiful dusting covered the mountains which seemed to stretch out like white-capped arms around the valley of the city below. I didn't realize that Austria is Catholic country; there are church spires in every direction. When we settled into our cozy little apartment and began cooking dinner the bells of Innsbruck began to ring out - ushering in Christ's birth. We attended Christmas Mass on the 25th and the main celebrant was the Bishop. We went early and got a seat (unlike most who had to stand during the entire celebration). I knew that the Austrians were famous for music but nothing could prepare me for the heavenly sounds of a full choir and orchestra. Ryan turned to me and said, I feel like we're at a concert! A moment I shall not forget.

I have never been on skis in my life but really wanted to try cross country skiing. Far out of my comfort zone, we bought some light waterproof clothing and drove up the mountains to Seefeld. This small touristy town had just had a snowfall the night before which created ideal conditions. Although I fell a few times, I started to get the hang of it and really loved the experience and the views were spectacular! We will definitely be out on the slopes again this winter.

We ended our time in Austria in the city of Salzburg, home of Mozart and apple strudel. We ate traditional schnitzel and potato salad and sampled the most famous of dishes, strudel with vanilla sauce. I am not usually a fan of sweets, but had a few bites of what I believe to be one of the greatest of desserts. We walked around the city, visited the shops and toured Mozart's childhood home which houses his original violin and piano. He was a musical genius and promptly upon returning home I began listening again to his works.

It was Christmas 1818 when the most famous Christmas carol, Silent Night, was composed by Josef Mohr a top a hillside overlooking a snowy Austrian town. I am so thankful we chose such a lovely country to visit at this time of year. Oh the wonders of what is hidden inside a book! 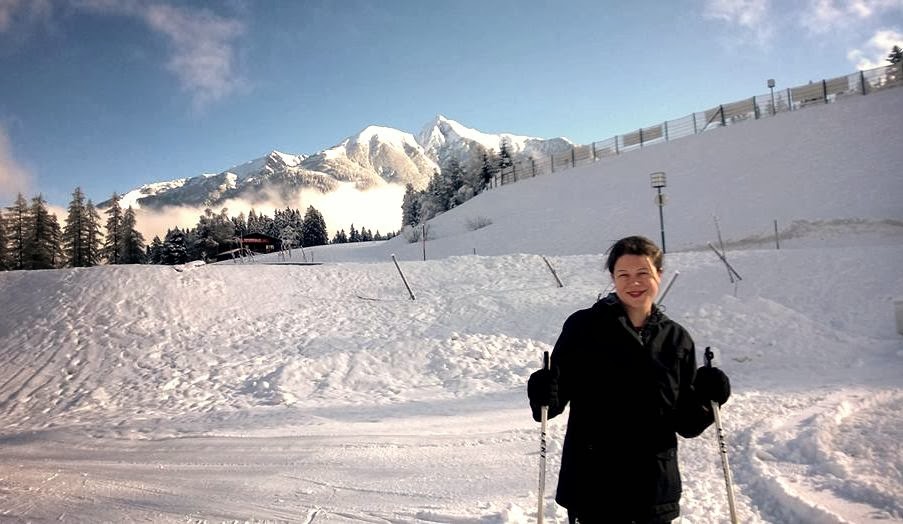 Laurel
Native Seattleite, who for the time-being calls The Netherlands home with my husband Ryan. I am a book nerd, a lover of good films, earl grey tea, and any new indie music I can get my hands on. I also love to write, which is why I'm blogging. My postcards are to keep family and friends apprised of what we are up to across the pond and allow me to expand on other interests floating around in my head. Enjoy and feel free to subscribe to get the latest updates.